Skip to content
April 24, 2011October 6, 2013
Tax policy is the contentious partisan issue in the US and elsewhere. The current climate of fiscal ‘austerity’ combined with mounting levels debt is generating further conflicts between the ‘anti-excessive-spending’ and  the ‘we-need-to-continue-the-stimulus’ camps. In the ‘anti’ camp, whether in the US or other parts of the developed world, the proposals are to curtail social policy, reduce the wages of public employees, increase the retirement age and so on and forth…
You may be forgiven for concluding that this is because there is no other way to find the needed source of financing. In that case, have a look at Thomas Piketty publications page and the dataset for his article « How progressive is the U.S. federal tax system ? A historical and international perspective ». I think it  helps to put the current debate in perspective by assessing how much scope there is to increase taxes. So here is the tax rates for different income groups back in the 1960s when it had its longest period of uninterrupted economic growh. When combining all the taxes on the top 1% the rate reaches 70%.

Now compare this with the situation in 2004. Notice anything? Yes, it’s hard to be convinced by people arguing that raising taxes on high income would amount to ‘bank bashing’, ‘soak-the-rich’ and populist non-sense. 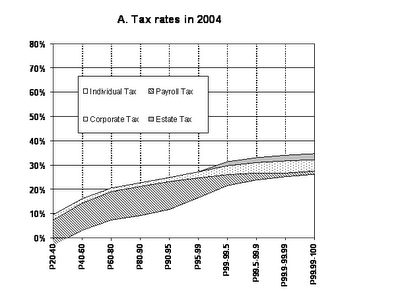 I’ll leave you with a graph of the share of total income that goes to the top 0.1% of the US income distribution.