Skip to content
February 26, 2011
With the current fiscal problems and the emerging agenda proning ‘austerity’measures, there has been a tendency to argue that we’re having these issues because the public sector has grown beyond any reasonable limits. Hence we now need to cut back. Leaving aside the fairly obvious point that part of the budgetary  problems we face are cyclical (i.e.; automatic fiscal stablisers or discretionary expansionary policies), is there any evidence that the public sector is too big?
One way to look at this issue is to analyse the number of public sector jobs per 1000 individuals in the OECD and see whether there has been any drastic change in the past three decades. The first thing which is blindingly obvious is that few countries have experienced significant increases once you adjust for population growth: Though some (Spain and Finland for example) have experienced increases, the UK and Canada have seen important falls in the adjusted number of public sector jobs. And while there were non-trivial increases in Greece and Portugal, but the level in  comparative perspective remains low. Last but not least, the UK, Ireland and the US which currently face particularly acute fiscal problems do not stand out in terms of public jobs as profligate. 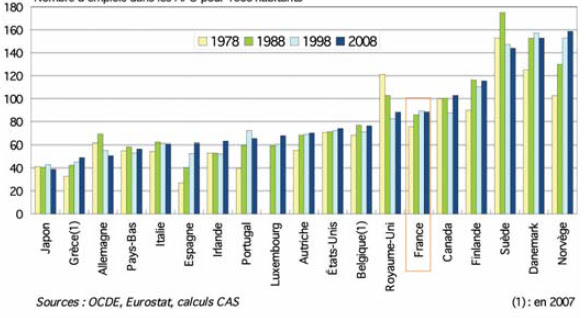